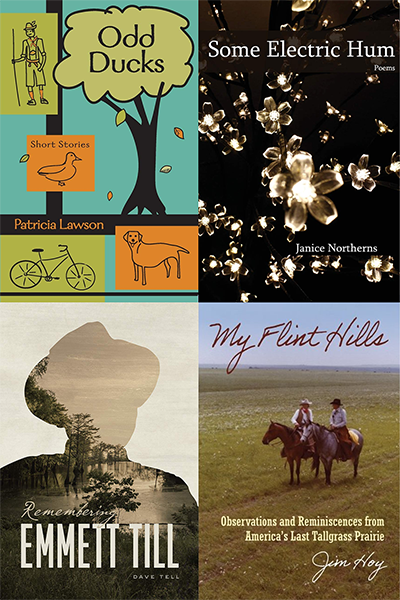 LAWRENCE – The Hall Center for the Humanities at the University of Kansas has announced the recipients of the 2021 Byron Caldwell Smith Book Award. The awards are presented in three categories: fiction, poetry and non-fiction.

The Byron Caldwell Smith Prize was created through the bequest of Kate Stephens, a former KU student and one of KU’s first female professors. As an undergraduate student, Stephens learned to love the study of Greek language and literature through Professor Byron Caldwell Smith. She created this award in her name. It is awarded every two years to people who live or work in Kansas and have written an outstanding book published within the previous two years. The next Byron Caldwell Smith Awards will be presented in 2023.

This first collection of nine humorous stories, set in and around Kansas City from the 1950s to the 2000s, often depicts adults awkwardly mentoring talented young people, whether in a community garden, library, or in individual councils. Other characters feel like strangers in their own neighborhood or suddenly become strangers when they stray into unfamiliar places. Patricia Lawson’s work has been published in Pleiades, The Dalhousie Review, New Letters and elsewhere. She taught for many years at Kansas City Kansas Community College and was associate editor of The Same. “Odd Ducks” is his first solo album.

Janice Northerns’ debut collection, “Some Electric Hum,” unraveled the gnarled branches of a family tree into complicated love and endurance poems. Deeply linked to place, these poems stretch from Texas to Kansas to contain the objects and people that create a personal story and “prey on words just west of the language.” Northerns, who grew up on a farm in rural West Texas, currently lives in southwestern Kansas.

Jim Hoy, professor emeritus at Emporia State University, has always called the Flint Hills home, and over the decades he has studied them – their rugged terrain and quiet beauty, distinctive folk life and cattle culture – and gathered his observations to bring Flint Hills home to readers in a singular way. “My Flint Hills: Observations and Reminiscences from America’s Last Tallgrass Prairie” combines family traditions and anecdotes of ranching life with reflections on the region’s rich history and nature.

In “Remembering Emmett Till,” Dave Tell, professor of communication studies at KU, gives five accounts of the infamous crime commemoration. In a development no one could have predicted, Till’s murder – one of the darkest moments in Mississippi history – became an economic engine for the Delta. Historic tourism has turned seemingly harmless places like bridges, landing stages, gas stations and riverbeds into sites of racial politics, reminders of the still unresolved question of how best to remember the victim of this. heinous crime. Tell builds an insightful and compelling dossier on how these memorials have altered the physical and cultural landscape of the delta.

Winners will receive their prizes and make brief remarks on their award-winning books during a public presentation, book signing and celebratory reception at the Hall Center for the Humanities. This event, which is free and open to the public, would normally take place later this fall, but due to the current spike in COVID-19 infections, it will take place in 2022 instead. The date and time will be announced. on time .