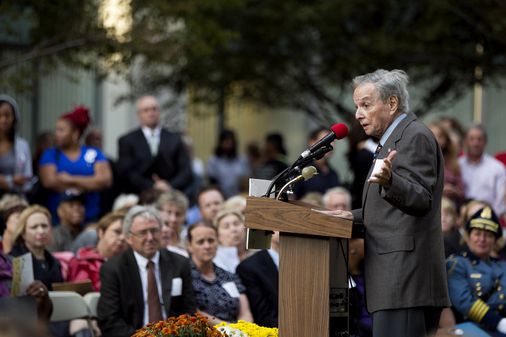 The founding rabbi of Beth El Temple Center in Belmont, where he served for 36 years, Rabbi Grollman was 96 when he died of congestive heart failure October 15 in his house in Belmont.

He was often honored for his compassionate work, which included a trip to Oklahoma City several times to advise families after 168 people – including 19 children – were killed in a 1995 terrorist bombing.

Cited as a Heroes of the Heartland for his work with families in Oklahoma City, he comforted residents who had already started crying while awaiting news of their missing loved ones in the days following the bombing.

In tragedies such as the Oklahoma City bombing, Rabbi Grollman recognized the different paths of mourning that each person faces.

Over the years, many grieving people he met have sought explanations for impossible situations.

“When someone asks me a question that I cannot answer, I write a book,” Rabbi Grollman said with a smile.

These difficult investigations prompted him to write or co-write 27 pounds, among them “Explaining death to children, “Living with the loss, Healing and Hope, “”Talk about death: A dialogue between parent and child ”, and“Live when a young friend commits suicide.

His books have become a must read for those in mourning and for those whose own work has focused on how people cope with tragedy.

“Earl Grollman’s writings hold a special place on my shelves,” Rabbi Harold S. Kushner, author of “When bad things happen to good people,” once said, adding that “no one does a better job for help us help disaster victims. adult or child to cope with grief.

Rabbi Grollman and his work have been featured on NPR, the Oprah Winfrey TV show, and “Monsieur Rogers neighborhood. “

“As an advisor, author and person, Earl Grollman makes a wonderful difference in this world,” said Fred Rogers.

High praise for someone who, in his own description, felt like “a fake” the first time he was called upon to bring comfort to the family whose son had drowned.

As he became more familiar with grief and sorrow, the scope of his work widened. He has also written about the emotional sense of loss that follows divorce and the continued grief of families whose loved ones fall into dementia.

“If there is loss, there is grief,” Rabbi Grollman said in a 1997 interview with The Globe.

“Grief is how we react to loss,” he said. “It’s an emotion, not an illness. It is love that does not want to let go, because something has been lost in our life.

The younger of two brothers who became rabbis, Earl A. Grollman was born in 1925 and raised in Baltimore, son of Dorah Steinbach Grollman, who taught in a Hebrew school, and Gerson Grollman, who sold books and postcards on a pier. as the ships arrive.

Although the family is poor, Rabbi Grollman’s father generously shared what he had with those less fortunate. Sometimes he would come home without his jacket. “Someone needed it,” he said to his wife.

Earl and his brother, Jerome, both received their rabbinical education at Hebrew Union College in Cincinnati, and Jerome headed the United Hebrew Congregation in St. Louis for many years. Jerome is dead In 2008, at 86 years old.

While Rabbi Grollman was in college, he met Netta Levinson of Pittsburgh one summer while they were both at Camp Emma Kaufmann in West Virginia. They married the following year, in 1949.

Netta is an artist and her paintings fill the couple’s home in Belmont.

Earl was Assistant Rabbi at Temple Israel in Boston when he was called in 1951 to be the first full-time rabbi at the Beth El Temple Center in Belmont, even before the building was completed and dedicated.

As word of his expertise and empathy spread, calls poured in from across the country to their home in Belmont.

“They’re calling information and we’re the only Grollman in the phone book,” Netta told The Globe in 1984, after receiving 300 calls in a single year about the suicide alone.

Such calls continued until the last month of Rabbi Grollman’s life.

“Some people called her every day,” said her daughter, Sharon of Cambridge. “They felt like they had to talk to him every day. They couldn’t go a day without hearing his voice. He was people’s best friend.

Rabbi Grollman’s many honors included a Lifetime Achievement Award from Children’s Hospice International, which appointed the Earl A. Grollman Award for mourning in his honor. He also received an honorary degree from Mount Ida College in 1997.

When he was little, his family kept him from talking about death. He often recalled that at 14, he was considered too young to attend his grandmother’s funeral, and that an uncle silenced anyone who said the word dead aloud.

As a certified death educator and counselor, he has encouraged families to discuss death and bereavement with children and to pay close attention to what they say.

“There is a Yiddish aphorism: we have two ears and one mouth, so we can listen more than we speak,” he said in a conversation at Highmark Caring Place, a center for children, adolescents and their grieving families, based in Pennsylvania. “You don’t have to talk. Love understands; he doesn’t need words.

In addition to his wife Netta and daughter Sharon, Rabbi Grollman leaves behind two sons, David of Burlington and Jonathan of Lexington; six grandchildren; and five great-grandchildren.

A private funeral service took place. A public memorial gathering will be announced.

Rabbi Grollman was no stranger to enormous grief in his own life. A sixth great-grandchild, Saul, died 20 days after birth.

Yet, throughout his life, Rabbi Grollman was always ready and able to help those who were grieving.

“I don’t know how you did it,” Sharon said in her eulogy. “How can you read everyone’s hearts before they can figure it out for themselves?” How did you know how to offer strength and healing when people previously believed that they could not be healed, that there was no more hope?

Bryan Marquard can be reached at [email protected]