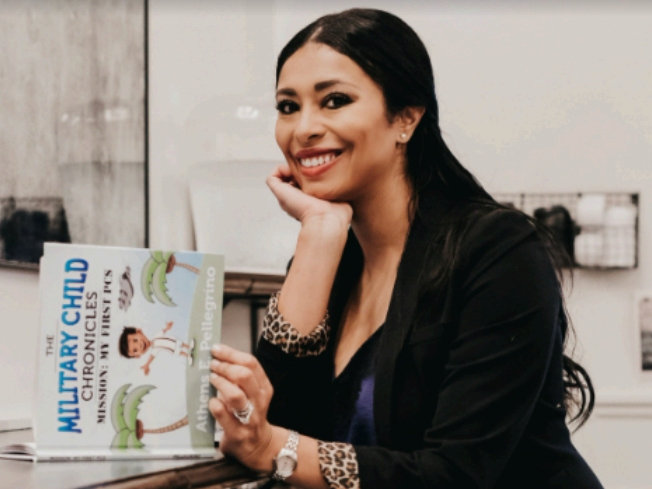 TAMPA, FL – An author of children’s books who grew up in Ocean City is preparing to release the second book in her series “The Military Child Chronicles” this fall.

Athens Pellegrino is a busy mother of two who works for the US Air Force as a civilian budget analyst while her husband is on active duty. Their military lifestyle forced them to move across the country, and sometimes overseas for work.

In the summer of 2020, Pellegrino was pregnant with her daughter and her son was 17 months old when the family received Permanent Station Change Orders (PCS) and had to relocate amid the pandemic.

As the family prepared to move from Montgomery, Alabama to Tampa, Fla., Pellegrino tried to find books on moving military families that she could read to her son, but couldn’t find anything. that suits his age group. Most of the books she found were based on the deployment or departure of a parent.

“Initially, I decided to write her own story and keep it in the house to build excitement for the move,” Pellegrino told Patch.

Once she started writing, a few close friends asked to read her stories as they felt it might help them when the time came for their families to relocate again.

Realizing that the book could be a resource for children of the military and that there were many more stories to tell from their perspective, Pellegrino decided to self-publish his book.

“MISSION: MY FIRST PCS” was released on May 27, and since then “The Military Child Chronicles” has grown into a multi-book series that addresses the various obstacles children of military families face.

The story illustrates and highlights the difficult feelings that children can experience, as well as tips and activities to help military families navigate the changes they experience as they move throughout the book.

“Often military families are very anxious or upset because they love where they are now and need to move to a place even further away from family,” Pellegrino said. “There are just a lot of bad stigmas about the move and I wanted to make it a more positive thing for families.”

The books are closely inspired by Pellegrino’s family, and she expects the stories in her books to continue to draw on her children’s experiences as they grow up.

Her second book, due for release in November, will focus on the geographic separation that families face and how to deal with it during the holiday season.

Her books can be found on Amazon, Barnes and Noble, Target, and Waterstones.

Although Pellegrino has lived all over the world, she still remembers growing up and attending school in Ocean City. She continued her studies at Saint Joseph’s University in Philadelphia, where she met her husband. The couple got married at Renault Winery in Egg Harbor City.

Pellegrino and his family return to the Ocean City area at least once a year. His parents live across the bridge at Somers Point and his brother lives in Egg Harbor Township.

“We have a lot of sentimental memories, which is why we try to go back (to Ocean City) no matter where in the world we live at least once or twice a year,” she said.

Keep up to date with what’s happening in your community by subscribing to your local Patch newsletter here.