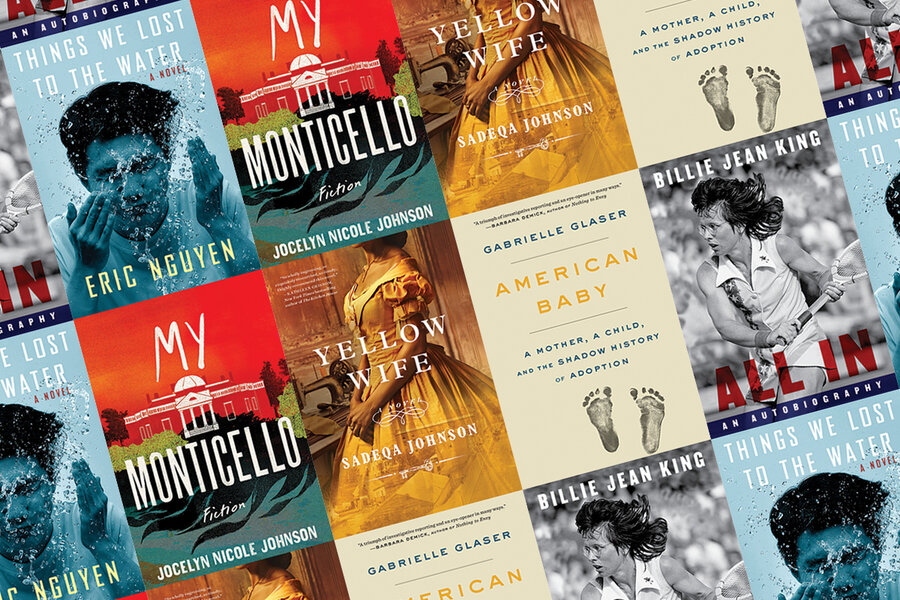 “Reading is a discount ticket everywhere,” wrote former Chicago Tribune columnist Mary Schmich in 1998. This is especially true of our reviewers’ choices for the best books of the year. Whether set in faraway lands or nearby, these fiction and non-fiction titles have stood out for their humanity and inclusiveness, as well as the quality of the writing.

Things we lost in the water
by Eric Nguyen

Why we wrote this

A good book doesn’t leave readers where they find them. Our favorites for 2021 include stories that inspire readers to walk in other people’s shoes, honor challenges overcome, and feel the redemptive power of friendship.

This first novel covers three decades in the life of a Vietnamese immigrant family who escaped war and communism to settle in New Orleans without the father – who has passed away. Eric Nguyen exquisitely captures nostalgia for childhood, the issues refugees face and the search for healing when secrets shake the soul.

“Libertie” follows a black girl born free in the Age of Reconstruction. Her mother is a doctor who wants nothing more than Libertie to follow in her footsteps, but Libertie has different ideas about what freedom really looks like – for herself and for her people.

Klara and the sun
by Kazuo Ishiguro

In his first novel since winning the Nobel Prize in 2017, Kazuo Ishiguro explores questions about what makes humans irreplaceable. This parable of a society in which science has been taken to ethically questionable levels is, thanks to its narrator – a kind, intelligent, sympathetic, solar-powered artificial friend – a surprisingly warm moral tale of love, the hope and empathy that subverts our expectations of dystopian fiction.

Irish immigrant Margaret Maher works as a maid in poet Emily Dickinson’s family home, cleaning, cooking and keeping her mistress from prying eyes. Margaret’s tinged voice of Tipperary brings this captivating novel to life; it is a prospect full of honesty, humor and intelligent observations. Upon discovering Emily’s worms, Margaret breathes, “Like sparks, they were – tiny fragments of light.”

My Monticello
by Jocelyn Nicole Johnson

Jocelyn Nicole Johnson’s collection of short stories directs its powerful beam on the closeness of history, racial trauma, and community survival. The story of the title follows a group of residents fleeing a white supremacist seat in their neighborhood of Charlottesville, Virginia. Led by Sally Hemings’ descendant, Da’Naisha, the group escapes to the well-preserved parsonage of Thomas Jefferson.

In a coastal garden in northeastern Japan sits the Wind Phone, which offers visitors a place of grace for their grief. This calm novel follows grieving Yui and Takeshi as they form a friendship of shared experience – and navigate the most difficult benches of a deeper relationship – in lyrical, unhurried prose.

A young zookeeper tending to a motherless elephant explores the depths of love and loyalty in a spellbinding novel set in Belfast, Northern Ireland during World War II. S. Kirk Walsh’s account was inspired by the true story of Belfast Zoo’s ‘elephant angel’, and it provides a much sought-after backdrop for complex characters.

Sadeqa Johnson’s novel is a layered look at the journey of Pheby Brown, a multiracial woman born into slavery and, ironically, into privilege. Johnson deeply explores the roots of color, class, and gender in the 1800s. The book lays bare what it means to struggle to survive as a “possessed” woman.

Astrobiologist Theo Byrne is raising his struggling 9-year-old son after his wife’s death. As the genre-defying novel explores issues such as the expanding cosmos and our dying planet, central to this heart-wrenching but beautifully written story is the bond between a father and son. (Readers might want to know about an ominous plot twist.)

How beautiful we were
by Imbolo Mbue

Imbolo Mbue, a Cameroonian American author, tells a topical story about the people of Kosawa, a fictional African village, who are fighting the environmental devastation caused by an American oil company. It focuses on Thula, a young woman who emerges as a revolutionary when legal remedies fail and villagers discover the power to stand up for what is right.

The phrase
by Louise Erdrich

Fresh out of her Pulitzer Prize for “The Night Watchman,” Louise Erdrich offers a compelling and highly readable story that takes place in her real Minneapolis bookstore. Through his main character, Tookie, Erdrich traces local events of the past 18 months, seeking to understand the murder of George Floyd, racial tensions and the pandemic. The book is imbued with humor and a sense of urgency.

Gabrielle Glaser tells the heartbreaking tale of Margaret Erle, a single teenage girl forced to hand over her baby to an adoption agency in 1961. The empathetic tale alternates between Margaret and her son David, through their poignant reunion, while also illuminating the troubling story of adoption in postwar America.

Pulitzer Prize winner Annette Gordon-Reed renders a perfectly quilted historic piece seen through the eyes of an African-American family in Texas. It follows the rarely shared stories of descendants of enslaved blacks from the 1820s to their emancipation in Galveston on June 19, 1865.

Suzanne Simard is a leading forest ecologist and a pioneer in the field of plant communication. She writes that trees are complex and interdependent social organisms connected to each other by underground networks. This book is not just about science, but a deeply personal quest to understand one of the most dominant species classes on Earth.

Fox and me
by Catherine Raven

In these thoughtful memoirs, Catherine Raven finds herself out of step with the world around her and retreats to a piece of property in the Montana countryside, where her work is online and her neighbors are a comfortable distance away. All the neighbors, that is, except one: to Raven’s surprise, a wild fox begins to visit her regularly, and over time the two develop an unusual and touching friendship.

A master storyteller sets out on a journey to learn more about his grandfather and to recover an apartment building that was stolen during the Holocaust. The odyssey is fascinating and sobering.

How the word went
by Clint Smith

In his first non-fiction work, Clint Smith sets out on a very personal tour of some hot spots in the history of American racism, from Angola’s prison in Louisiana to Thomas Jefferson’s Monticello, which is now a bustling tourist attraction. The result is a record that is both brilliant and disconcerting.

Ashley C. Ford’s father was in prison as a child, and his memoir focuses on the twin pains of his absence and the difficult presence of his mother. With deep empathy, Ford leads readers through his experiences of growing black in the Midwest. From a vulnerable child to an independent adult, she shows the value of compassion.

All in
by Billie Jean King

The tennis champion writes about her life with self-awareness and humility, without minimizing her role as a pioneer of women’s rights. She gently criticizes her young person for having felt the need to hide her sexual identity in order to safeguard her career, and evokes the toll that this secrecy has demanded.

A life of Picasso
by John Richardson

The fourth volume of John Richardson’s biography “The Life of Picasso” follows the great artist through Paris into the 1930s and early 1940s. Clear and compelling, he carefully and fairly examines his life and his art.

Get stories that
empower and elevate Daily.

In the summer of 2006, the British security services, with the help of the CIA, thwarted what would have been the most devastating terrorist attack since September 11: an Al-Qaida plot to detonate bombs on seven transatlantic commercial flights, reportedly killing more than 3,000. “Disruption” is Peritz’s meticulous and compelling story of this plot, from the radicalization of the perpetrators to their conviction in a UK courtroom.