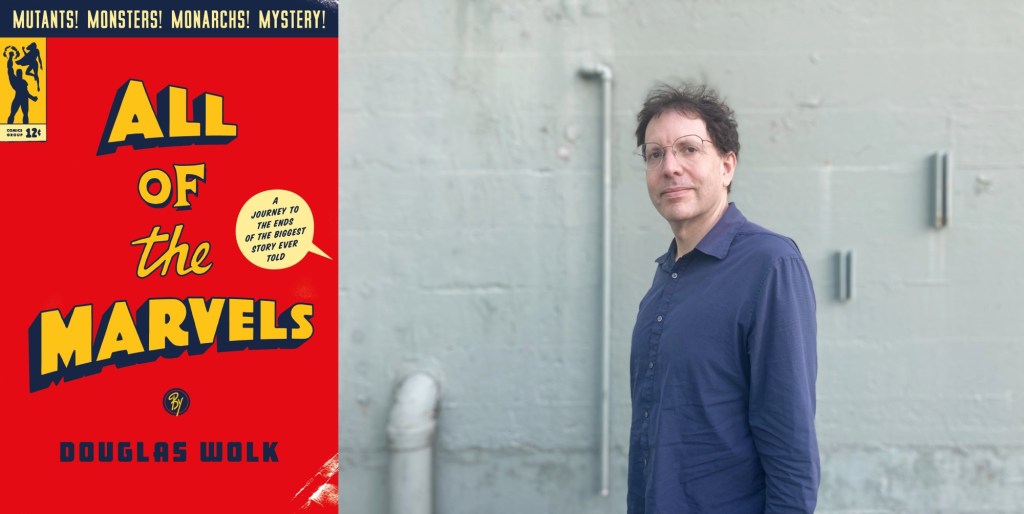 Don’t try this at home.

Not that you shouldn’t be reading Marvel Comics, Wolk is quick to add. Explore every nook and cranny of Marvel’s immense multiverse that appeals to you. To follow Spider Man Where the Avengers, Thor Where Black Panther, the X-Men – devil, step into Squirrel Girl if a peace loving bushy tailed superhero is your kind of thing.

Don’t feel like you have to read them all, as Wolk decided to do for his new book, “All the Wonders: A Journey to the Ends of the Greatest Story Ever Told”.

“In a way, it’s a waterfall,” Wolk said recently from his home in Portland, Oregon. “But it was also inspired by my son, who found out what these comics were without having read any of them, decided, ‘Oh, I’d like to read them all. “

“It got me thinking,” Wolk says. “What would it be like to read them all?” This story is more or less consistent internally, but it’s so big that not even the people who created it have all read it.

“I liked the idea of ​​watching the whole story, including parts that I would never watch otherwise,” says Wolk. “It was interesting – and it revealed a lot.”

In the summer of 1979, a 9-year-old boy visiting his grandparents in upstate New York spent 40 cents at a newsstand for an issue of DC’s “Green Lantern / Green Arrow” Comics.

“And, of course, it ended on a cliffhanger, and I had to find out what happened next,” Wolk says. “So next month I was back home in Michigan, and I was like, okay, so I went to the newsstand and there was the next issue. And then there was another tape. drawn that contained Green Lantern, so I chose that as well.

Regular trips to the newsstand for the latest issues of this comic or which have quickly become a habit. In no time, he found his way to the Curious Bookshop in East Lansing, a veritable comic book store, and it became his weekly haunt.

“A few years later, they were like, ‘We’re just going to teach you how to use the registry,’ Wolk says. “I was working there when I was about 13 years old.

Now 51, Wolk has continued to buy, read and collect comics, but when asked how many issues and boxes exactly are stored at his house, he pleads ignorance.

“I don’t know, because I don’t like to think about how high that number is,” he says.

Suffice it to say that he had plenty of comics on hand to kick off his Marvel Marathon, although he mostly read on Marvel Unlimited, the online subscription site that has almost everything the company does. has never published.

“Well, from start to finish, about five years – and it took about two years to finish reading. “

In the book, Wolk urges readers to work their way through the Marvel Comics maze as he ended up doing, following the threads that seem most interesting or fun at any given time.

“I was on a cruise,” he says. “I was like, ‘Let’s talk about Mark Gruenwald’s’ Captain America’ and see where that takes me. But I could meet a character and be like, ‘Oh, this character, that’s appeared elsewhere before, that’s a story that I haven’t read, yeah, let’s get to that old’ Tales of Suspense ‘and read this story. .

“Or today, I wanted to read monster comics. Anything that looked funny to me, I did,” he says.

The Marvel “Thunderbolts” comics he saved for dessert: “I knew I was going to like it, and I knew it would be a nice, fun note to end,” Wolk says. And sometimes he forced himself to eat all his vegetables.

“There were a few times when it was just comic book blocks that just didn’t seem like the next fun thing to do,” he says. “At one point I had to lock myself in an apartment for two weeks and force myself to read all of ‘The Punisher’.”

While he kept a spreadsheet to keep track of his reading and make sure he read it all, the themes that finally surfaced in “All Wonders” were more intuition than data.

“Just pouring it all into my head is what helped me,” Wolk says. “Some things got stuck and some didn’t. I read the 15 issues or the number of issues of “Maverick”. I can’t tell you what’s going on in just one of them.

As he swallowed six decades of Marvel lore, patterns and themes emerged.

The book’s chapters alternate between longer guides on areas of the Marvel Universe and shorter “interludes” on narrower chunks of its history.

The shorter chapters can serve as appetizers on topics such as Stan lee, Jack Kirby and Steve Ditko, the holy trinity of the creators of Marvel in the 60s, or the way Marvel Comics incorporated real historical events, such as the Vietnam War or the mandates of American presidents, into its narrative.

The most important chapters shine a lot on specific characters or storylines – Thor and Loki here, Black Panther there, the long X-Men saga, the importance of Jonathan Hickman’s most recent series on “Avengers” and “New Avengers”.

Peter Parker’s boy-to-man journey, however, is not something Marvel could or would want to extend for 60 straight years, he says.

“He’s going to have to grow up at some point,” Wolk says. “So what it becomes is a cycle where it comes to a certain point, and then it’s knocked down again a lot further than it’s reached, and has to start climbing again.”

To help readers understand Spider-Man’s journey, Wolk’s tale explores over two dozen comics and explains how each has filled the Spider-Man portrait over the decades.

The book also examines how Marvel Comics often reflected when they were created for better or for worse. It examines how different eras included now vile stereotypes, and how the worlds of Marvel Comics were too long the domain of white men, whether they were the superheroes on the pages or the creators behind the scenes.

A chapter on Marvel’s “Master of Kung Fu” series, which ran from 1973 to 1983, and which this year entered the Marvel Cinematic Universe with the movie “Shang Chi and the Legend of the Ten Rings”, illustrates part of this. It is, Wolk writes, a gripping, well-told story that is damaged by outdated and offensive stereotypes, such as the villainous Fu Manchu or the extremely inappropriate skintones used for the hero of the books and other Asian characters.

Marvel has finally found a more progressive foothold both in its storytelling and in the writers and artists working for the company, and the book’s penultimate chapter focuses on two more recent series – “Ms. Marvel,” which stars a Muslim American teenager, and “The Unbeatable Squirrel Girl,” whose hero is a young white woman whose friends are all people of color – which usher in a more beneficial future.

(Not that everything is totally pink: this month, writer and director Steven DeKnight, who also wrote comics for Marvel, announced that he would no longer work for the company after learning that Marvel Comics editor-in-chief CB Cebulski, who is white, had previously written comics for Marvel using a Japanese pseudonym.)

That feeling that Marvel Comics is offering something good, and even better, something fun, is a big part of why Wolk wrote the book, and in fact wrote it twice because his first manuscript. seemed to him to miss this festive aspect of the epic story.

Jump where you want, he says in conversation and writes in the book. You don’t have to have read everything – remember, do what he says, not what he does – to enjoy the trip.

“This is all created for fun, for fun,” Wolk says of Spider-Man in particular, but all of the wonders in general. “It’s right there on the surface. You can pick it up. There is no prerequisite. There is no background.