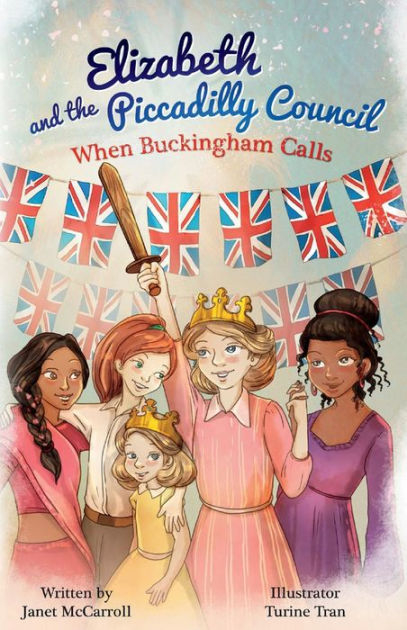 Growing up in Dublin and Pleasanton, Janet McCarroll was shocked and fascinated to learn that royalty existed in real life across the pond, not just fairy tales, when her mother told her about Princess Diana.

Although she did not realize her initial childhood dream of being a royal biographer, McCarroll found herself pushed to put her expertise to work for the British Royal Family this year, following the winding path that her aspirations followed. take.

McCarroll published her first book, “Elizabeth and the Picadilly Council: When Buckingham Calls”, and what is expected to be the first in a series, at the end of October of this year, after being brought in to complete the manuscript during her final semester as a graduate student in psychology at St. Mary’s College earlier in the year.

“I think part of me got really bored with all the things in life that I said I was going to do and not do,” McCarroll said.

Additionally, McCarroll said she has decided time is running out, given the heightened attention and negative press she sees as unfairly targeted against Queen Elizabeth as tensions within the Royal Family have become public in recent years. In particular, McCarroll said she hated to see it addressed to someone who had personally inspired and impressed her as a historical figure.

“It pained me a little bit how many people didn’t know much about her,” McCarroll said. “Okay, she’s from a different country, but I still feel like this is history being made here before our eyes.”

For McCarroll, the Queen’s long reign is important not only for how long she has held the throne, but also for the large number of historical events she has witnessed and been a part of. On a personal level, McCarroll said she was struck when she was young when she saw a woman close to her petite size order a coin.

“I was telling myself that people don’t respect me so much because I’m small and I laugh, but power doesn’t have to look stoic and big and intimidating,” McCarroll said. “There are different types of power, and that doesn’t make him weaker or less than because he doesn’t look like someone else’s. So I hope everyone, boy, girl, no binary, black, white, big, small, young, old, atheist, religious, whatever, hope everyone can understand this message. “

Getting that message across to a wide range of audiences, McCarroll says, inspired her to write the book as a historical children’s fantasy novel.

“I don’t think people are being very fair to adults when it comes to writing,” McCarroll said. “I think the older you get, the drier the reading sometimes gets.”

Despite her encyclopedic knowledge of the details of British royal history, McCarroll said she chose to incorporate elements of fantasy surrounding the Queen’s ascension to the throne and life at Buckingham Palace into the story.

“I was kind of like, well, all angles were taken, but the only thing I’ve ever seen is a series of children’s adventures about his life, especially around his youth,” he said. McCarroll said.

In particular, McCarroll said she was sensitive to the Queen’s social isolation as a child and the difference between growing up in a palace and fantasy. Because of this, she chose to focus the plot on what it would have been like to be a young royal, unexpectedly pushed to power, with a group of friends to support her along the way.

“I think of the very few children that Queen Elizabeth had a friendship with as a child,” said McCarroll. “How must it have been for the other children to be friends with such a remarkable person? How could the Queen trust someone or know whom to share secrets with? a connection we all need, but it must have been very difficult for it to come. “

McCarroll said the cast of characters she wrote as a group of friends of the Queen were closely inspired by her own friendships and the people she had met over the years.

“I think there’s a bit of every personality in there,” McCarroll said. “… Every group of friends should be like this. It’s no fun if everyone is the same.”

McCarroll is about to sign his recently published book at Half Price Books at 7898 Dublin Blvd. Saturday (Dec 18) from 12:30 p.m. to 4:30 p.m. More information is available here.