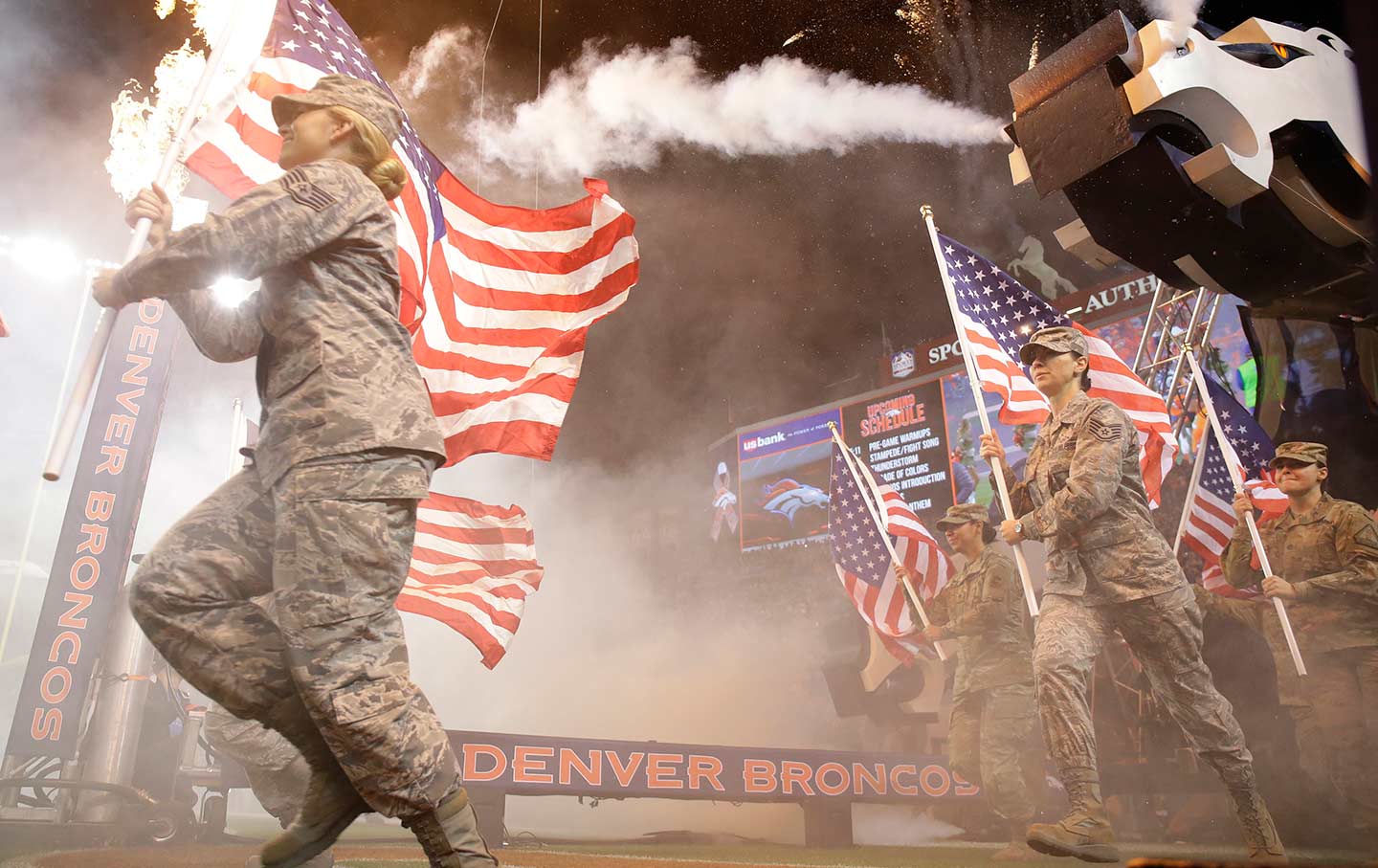 Military personnel carry flags on the field before an NFL game on November 12, 2017 in Denver. (Jack Dempsey / AP Photo)

EDITOR’S NOTE: This article originally appeared on TomDispatch.com. To stay up to date with important articles like these, sign up to receive the latest updates from TomDispatch.com.

Thank you for signing up The nationthe weekly bulletin of.

Thank you for signing up. For more than The nation, see our latest issue.

The nation is supported by readers: add $ 10 or more to help us keep writing about the issues that matter.

Did you know you can support The nation while drinking wine?

The 30-year interregnum of the world hegemony of the United States, ”writes David Bromwich in the newspaper Raritan, “was exposed as a fraud, a decoy, a cheater, [and] a sale. Today, he continues, “the armies of cheats are struggling to find the word for something that has happened and that has gone wrong.”

In fact, the armies of the cheated know exactly what happened, although they have yet to find precisely the right term to describe the catastrophe that befell this nation.

Here’s what happened: Shortly after the end of the Cold War, virtually the entire American foreign policy establishment succumbed to a monumental and self-defeating ideological fever.

Call it INS, short for Indispensable Nation Syndrome. Like the Covid-19, the INS takes a painful toll of victims. Unlike the Covid, we are waiting for the vaccine that can prevent its spread. We know that pre-existing medical conditions can increase a person’s susceptibility to coronavirus. The pre-existing condition that increases someone’s vulnerability to INS is the cult of power.

In 1998, Secretary of State Madeleine Albright not only identified the INS, but also captured its essence. Appearing on national television, she said, “If we are to use force, it’s because we are America. We are the indispensable nation. We are standing. We see further into the future.

The United States does not see farther into the future than Ireland, Indonesia or any other country, no matter how old or how fresh. Albright’s assertion was then and is no longer worthy of being taken seriously than Donald Trump’s assertion that the “deep state” designed the coronavirus pandemic. Bullshit too.

Some of us (but by no means all Americans) have long concluded that Trump is and remains a congenital liar. Accusing Albright of lying, however, is seen as bad form, rude, even rude. She is, after all, a distinguished former public servant and the recipient of numerous honors.

Trump’s lies have made him persona non grata in polite society. Albright did not suffer the same fate. And to be fair, Albright herself is not alone or even primarily responsible for the havoc caused by the INS. While the former secretary of state was promoting the syndrome in particularly expansive language, the gist of her remark was anything but new. She was just repeating what, in Washington, is still taken for granted: America must lead. No imaginable alternative exists. Leadership involves responsibilities and, by extension, confers prerogatives. In other words, more crudely than Albright would have expressed it to a TV audience, we make the rules.

Specifically, Albright was alluding to a particular prerogative that a succession of post-Cold War presidents, including Donald Trump and now Joe Biden, wielded. Our political leaders regularly authorize the elimination, with extreme prejudices, of those who do not want to recognize our indispensable character.

If Irish or Indonesian leaders asserted such a prerogative, US officials would condemn them bluntly. Indeed, when the Russian president and the crown prince of Saudi Arabia each had the temerity to push back an adversary, American officials (in the first case) and the American media (in the second case) professed deep shock. How could such things happen in a civilized world? However, when a US president does such things, it is just part of the job description.

Three strikes and you’re out!

Now let me recognize the attraction of exercising privileges. I once took a private jet, very cool indeed.

Today, however, Bromwich’s armies of cheats have good reason to feel cheated. Their disappointment is not without justification. Bullshit has lost its mojo. Since the promulgation of the Albright Doctrine, US forces have bombarded, invaded and occupied various countries in the Greater Middle East and Africa with enthusiasm. They killed a lot of people, confusing millions more. And our divided and dysfunctional country is its poorest, as the cheaters themselves belatedly discovered.

Blame Donald Trump for this division and dysfunction? Not me. I hold as main responsible the militant suppliers of the INS. Though despicable, Trump was little more than an afterthought accomplice.

To understand how we got there, let us recall the story which ostensibly validates our indispensable character. It consists of sequential binaries, pitting freedom and democracy against all kinds of evils. During World War I, we fought militarism; during World War II we destroyed fascism; during the cold war we resisted and “contained” communism. And after September 11, of course, came the Global War on Terror, which is now approaching its 20th anniversary.

Good against evil, us against them, again and again. This recurring theme in the art of American government has given the INS its historical context.

Today in Washington, a foreign policy establishment afflicted with rigor mortis is reflexively reverting to the logic of 1917, 1941, 1947 and 2001, even if these binaries of the past are about as instructive today as religious conflicts. triggered by the Protestant Reformation of the 1500s.

Confronting evil is no longer the name of the game. Understanding the real nature of the game, however, would require shedding a past that supposedly illuminates but actually traps Americans in an unfolding catastrophe.

Today, race dominates national conversation. And few Americans would deny that we have a racial problem. But the United States also has a problem of war. And hardly anyone wants to talk about this problem.

Specifically, we actually have three problems with war.

Our first is that we have too much. Our second is that our wars last far too long and cost far too much. Our third is that they lack purpose: when our wars more or less end, America’s stated political goals too often go unfulfilled. American forces do not necessarily suffer defeat. They simply fail. As proof, look no further than the conduct and results of the wars in Iraq and Afghanistan.

Two trips to the plate. Two puffs. How could this have happened? In Washington, the question remains not only unanswered but totally unanswered, which, of course, leaves open the possibility of another similar failure in the future.

As a longtime soldier without any particular distinction, I am bewildered by the apparent lack of curiosity about the inability of the world’s most generously supported military to accomplish the missions assigned to it. If the Jan. 6 assault on Capitol Hill warrants a thorough investigation – as it surely is – then how can this nation pass through a succession of failed wars as if they were mere trouble? Shouldn’t our collective commitment to “support the troops” include a minimum of curiosity as to why they have been so misused, even if the resulting investigation is likely to prove embarrassing for senior civilian officials and military?

The liberal media is calling Trump’s claim that he won the 2020 election a big lie, as it does. But it is not the only one. The Indispensable Nation Syndrome, along with the militarism it has engendered in this century, should certainly be called, at the very least, the other big lie. Limiting Washington’s susceptibility to the INS requires recognizing that the immediate challenges that this country faces do not lend themselves to the most creative military solutions. Giving even more taxpayer money to the Pentagon helps prop up the military-industrial complex, but otherwise doesn’t solve anything.

Think about it. The defining reality of our time is the escalating climate chaos that so many of us now experience personally. This threat, after all, has potentially existential implications. Yet in Washington’s hierarchy of national security concerns, the climate takes a back seat to prepare for a new round of “great power competition.” Indeed, an unimaginative foreign policy establishment labeled Xi Jinping’s China to fulfill the role once attributed to Kaiser Wilhelm’s Germany, Adolf Hitler’s Germany, Joseph Stalin’s Soviet Union. and Saddam Hussein’s Iraq.

That China and the United States must come together to tackle the climate crisis seems to matter little. Nor the fact that the People’s Republic ranks as America’s largest trading partner and holds over $ 1 trillion in US debt. Maintaining the binary of good versus evil as the basis of a policy requires a major enemy. It matters little that the most fundamental assumptions about the continuity between the past and the present are not only illusory but clearly counterproductive.

So here’s the deal: the story didn’t end with the Cold War. At most, he paused briefly to catch his breath. Now he’s picked up and is heading off in directions we’ve barely begun to identify. The past that we have been conditioned to cherish, which is supposed to make sense of everything, more or less makes sense of nothing at all. As a result, it will not work as a map or a compass. Indispensable nation? Save me.

Do not mistake yourself. I don’t expect Madeleine Albright to apologize, but it would help if she at least gave a retraction. She might think of it as her farewell gift to the nation.