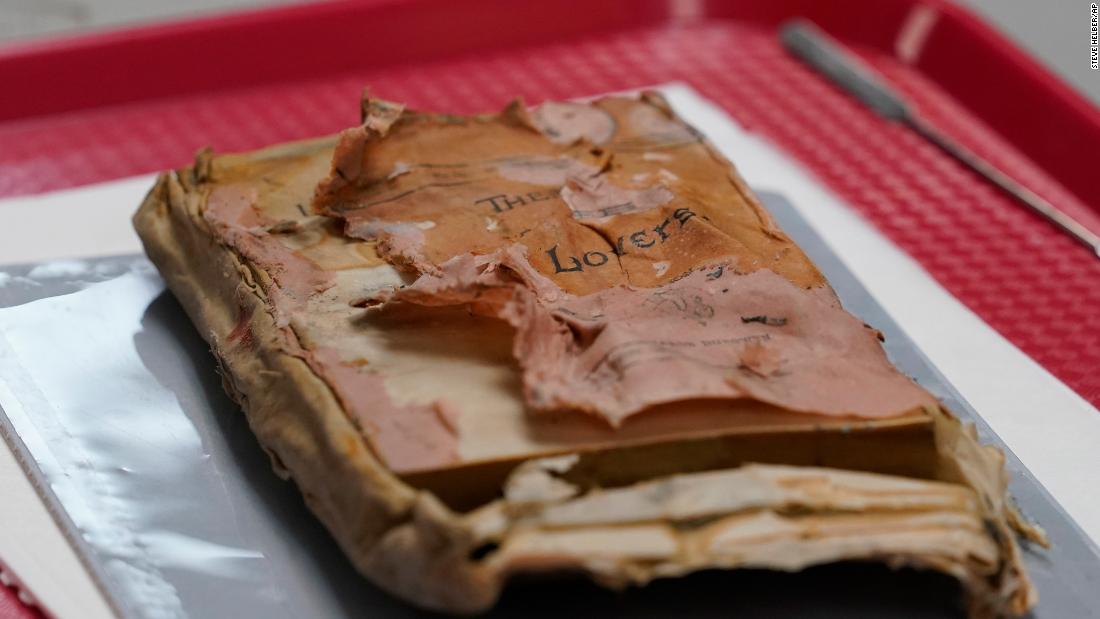 The capsule was found last week in the pedestal of a statue of Confederate General Robert E. Lee in Richmond, Virginia.

CNN affiliate WTVR broadcast a live stream that showed the process being carried out by experts in historic preservation.

The container was made of lead, which was corroded, so the delicate process took several hours as experts used multiple tools to gnaw at the box.

It started at 10 a.m. and ended around 3 p.m. when Governor Ralph Northam lifted the capsule lid to reveal the items.

Katherine Ridgway, curator at the Virginia Department of Historic Resources, was one of the experts working on the process and notes that one of the books had “love” written on it and a coin was attached, according to WTVR.

There was also a fabric envelope, which experts say appears to contain a piece of paper and possibly a photo, according to the live feed.

The items were all wet from the moisture that had accumulated inside the lead box, so experts had to work carefully to remove them and make sure they remained preserved.

“Since the artifacts are wet, they will be put in the freezer to prevent further deterioration,” Ridgway told WTVR. It is not known how long this preservation process will take at this time.

History of the time capsule

Workers found the time capsule on Dec. 17 during the dismantling of the 40-foot pedestal on Monument Avenue in Richmond, according to a press release from the Northam office.

The 12-ton statue of Lee on his horse, which was removed in September, has become a focal point for racial justice protests in Richmond – the former capital of Confederation.

The time capsule was found in the pedestal tower about 20 feet above ground level.

Officials believed it was embedded in the base of the pedestal, and in September crews used cranes and other heavy equipment to move 21 blocks of granite, some weighing up to 8,000 pounds.

Workers also dug a large hole 5 feet deep near the cornerstone of the pedestal in hopes of finding the time capsule.

Historians believe the time capsule was placed on October 27, 1887, and included around 60 items donated by 37 Richmond residents, many of which were Confederation-related, according to the governor’s office.

The state plans to store the pedestal until authorities decide what to do with the partial monument.

CNN’s Amir Vera and Artemis Moshtaghian contributed to this story.